Dynamic programming (DP) is an algorithm design technique for solving some of the seemingly most nasty problems you might face in an interview. The problem will often take the form:

Given a set of rules, find the optimal cost of some objective that is governed by those rules.

Which can show up as finding an optimal path through a maze, finding an optimal score for a game, or finding the number of possible outputs to a function. If you've searched the internet for tough interview problems, some of these examples will start to sound familiar. These are often labeled by interviewees as the toughest or scariest problems to be asked. Fortunately, with a better understanding of DP, these problems become drastically more simple.

The Fibonacci numbers form a useful numerical sequence that have been studied for a long time, since around 200 B.C. actually by an Indian mathematician despite the credited name. They also happen to be the "Hello World" of recursive computation, which is a great place to start to demonstrate the DP design technique.

We will solve the following problem:

The problem statement suggests a recursive solution to this problem could be written as:

We can look at the function call graph of this solution for f(5): 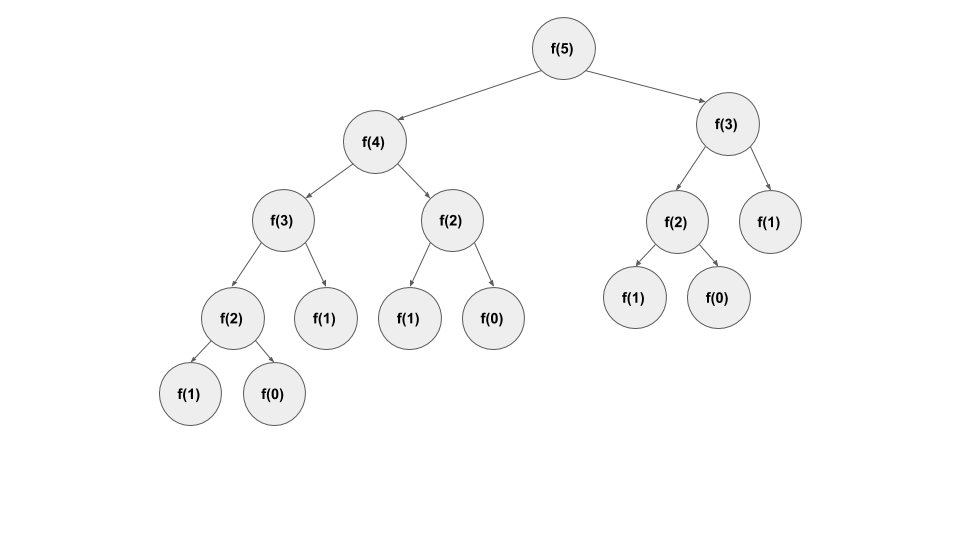 The call graph is a great way to get an idea of the computational complexity of a recursive algorithm and in this case also find wasted computations which are repeated subtrees. For example, f(2) is calculated three times.

As we know from our study of trees, a full or balanced tree will have size 2**n where n is the height of the tree or in this case the Fibonacci number we are solving for.

The call graph is a great visualization because it also gives us a hint that the actual required computations to solve for f(n) is just n, i.e., the unique nodes of the call graph.

So this is exactly the kind of problem DP can help us with. There are two main patterns to DP design, 1) Top Down or Recursion + Memoization and 2) Bottom Up sometimes referred to as DP Table design. Since, this problem is given as a recursive algorithm let's start with Top Down.

Memoization simply means we will store computations we make so that if we ever need them again we will just look them up rather than recomputing. That sounds like a great idea for calculating our Fibonacci numbers and dealing with the repetitive calculations. So let's first take a look at the brute-force recursive algorithm, with a little work counter added for illustration.

The result will be: The 6th Fibonacci number is 8 and requires 25 computations

That confirms our hypothesis that our complexity is more than O(N) and perhaps O(2**N). So let's alter our code with memoization. We will just need to store past calculations and look them up before blindly computing. The common storage mechanism is a hash table.

The result will be: The 6th Fibonacci number is 8 and requires 7 computations

At its core, that's really all there is to DP. Once you find a recursive solution to your problem that exhibits the computational explosion because of wasteful repetition you can really improve performance by saving computation and adding storage.

Similar to other recursive algorithms; however, there can be some benefit to transforming the problem into an iterative algorithm. When you do this you will often benefit by making the algorithm even more efficient by using storage more effectively, both in terms of the function call stack and auxiliary storage for the problem itself. In terms of DP, we consider this the Bottom Up DP Technique.

There are three main variants of DP problems that you will see in programming interviews. They are distinguished by the way we will define our the subproblem that is the core of the recursion or iterative computation. The key to looking at this is to see what work is "left to do". The three main variants are:

If you like videos, the introduction to dynamic programming in this class is very good: https://www.youtube.com/watch?v=OQ5jsbhAv_M