This page covers a range of topics to serve as a primer for building data-driven iOS applications with Parse. Some of the topics covered here are:

Parse is a service that allows app developers to effortlessly add a backend to their apps without worrying about server setup and maintenance. With some basic setup, one is able to get a database and RESTful API up and running. Additionally, it is easy to further add push notification and social integration capabilities in your app.

More about Parse on Quora

In covering Parse SDK functionality, we will be using example of building an Instagram like application from ground up (i.e. with your own backend). In each of the following section we will following use cases to build a basic version of the application:

Below is a quick overview of the app architecture:

For this app, we will be using just 1 additional data class (represented by PFObject) apart from _User class that Parse SDK created when first user is registered. _User is specifically reserved for PFUser and we can not change the class name for PFUser. However, we do get to name other classes that store the data. This class is will be called Post and will have following fields:

*default field - created automatically by parse SDK, no need to explicitly specify in PFObject for the class

Here is how data model would look like: (field_name: field_type) 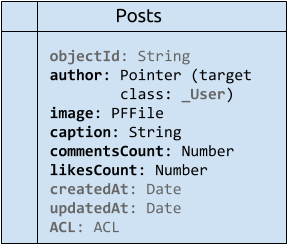 Post and _User data classes should be enough to store data based on use cases mentioned above.

3. Getting started with Parse

Parse used to provide a hosted version of their backend service with free registration. But as of February 2016, Parse has stopped new account registration as they have announced that the service will be shutdown on January 28th, 2017. They have open sourced their server code which you can host by yourself and use it as the backend to your application.

Please refer to this guide for instructions on how to host and configure your own Parse server.

See this section on the client SDK integration.

PFUser has several properties but following are the most important ones:

One of the basic use cases for user management is to have them sign up. Once you have setup a view (in storyboard) and created a corresponding view controller (as shown in below image):

The following code snippet shows how to sign up user:

Parameters: block - The block to execute.

Once the user has signed up, next step is to have them log in to your app. The image below shows the Xcode setup to do the same, followed by code snippet for user login (note that the username you enter is case sensitive).

Once a user successfully logs into your application, Parse caches the logged in user object for convenient access throughout your application. PFUser.current() can be used to get the current user. You can use this functionality in AppDelegate to check if there is a current user in Parse cache or not. If there is a cached user already present then you can directly load the Home view controller (without asking the user to login again).

🚨 If you get an error about -[AppDelegate window]: unrecognized selector sent to instance, you will need to move the above code to your SceneDelegate file instead, as shown below...

You can clear the current user by calling following class function on PFUser:

Each ParseObject has a class name that you can use to distinguish different sorts of data. For example, in case of our application, we might call ParseObject to store uploaded images with name Post:

You can also declare models that subclass PFObject to make it more convenient to set and get properties. In order to subclass PFObject, create a new CocoaTouch class with a subclass of PFObject in the wizard, and manually declare that the class implements the PFSubclassing protocol. More details in the official documentation on subclassing here. See the snippet below for an example:

We can save simply by calling saveInBackground():

We can also pass a completion block handler to check the success/failure of the save operation:

Live queries allows your client to be informed about events when changes to a given Parse query changes. There are currently 5 type of events supported: creation, update, delete, enter (an existing object now fulfills the conditions of the Parse query), leave (when an existing object no longer fulfills the condition). See this documentation for more context of the Parse LiveQuery spec.

To setup, we need to add the ParseLiveQuery to our Podfile:

Next, we need to instantiate a websocket client using the ParseLiveQuery.Client. We also need to create a subscription to events that may be triggered by the backend. Both the client and subscription should be declared outside lifecycle methods so they are not auto released. Otherwise, no subscription events will be triggered.

Note that the Armor class must be designated by the Parse back-end to support live queries. See this section on how to do so.

Handling Results from the Subscription

PFFileObject lets you store application files in the cloud that would otherwise be too large or cumbersome to fit into a regular PFObject. The most common use case is storing images but you can also use it for documents, videos, music, and any other binary data (up to 10 megabytes).

In this example, we will create and save an object to Parse for an image that the user wants to upload along with some other details. Let's create a model class for Post object. If you haven't already, first make sure to review the section above on subclassing PFObject.

Fetching data from Parse (via PFQuery)

PFQuery is used to retrieve data that is stored in Parse. Adding conditions to PFQuery can be done by using methods provided by PFQuery or by specifying an NSPredicate.

There are several other methods that PFQuery provides to support SQL-like querying of objects. For example, you can get 20 instagram posts that have more than 100 likes on the post with following code:

For more examples and list of other methods supported by PFQuery for specifying constraints can be found here.

A NSPredicate can be passed to PFQuery constructor to specify query constraints. Below example shows how to construct a query to fetch all instagram posts with more than 100 likes on them.

A complete list of features supported by Parse for NSPredicate can be found here.

If one of the keys in your PFObject refers to another PFObject (note that PFUser is a sub-class of PFObject) then that field is of Pointer type. For example, in Post object which represents an Instagram post, one field that you would want to store is the author of the post. You can do this by assigning the current user to the author key when saving the post.

By default, when you fetch a Post object it won't have the author information. In order to get the information for the "author" you will have to use PFQuery method includeKey.

(Use Case) View the last 20 posts submitted to "Instagram"

Based on above discussion, we can easily construct a PFQuery to fetch most recent posts from Parse as following:

Parse/UI is a collection of a handy user interface components to be used with Parse iOS SDK, which streamline and simplify logging in/signing up PFUsers and displaying a list of PFObjects.

Add pod 'Parse/UI' under target in your Podfile and run pod install. For more detailed instructions see this link.

Many apps need to display images stored in the Parse Cloud as PFFiles. However, to load remote images with the built-in UIImageView involves writing many lines of boilerplate code. PFImageView simplifies this task by abstracting away these parts.

How does push notification work?

This tutorial at raywenderlich.com provides a good introduction on how push notification works.

Note: This section is only applicable if you have deployed your own Parse server.

Please refer to this section in Configuring a Parse Server guide for detailed steps on enabling push notifications on your server.

If you need to troubleshoot whether network calls to the Parse server, you can monitor the requests and responses. First, add a few custom notification types:

Add these functions to listen to notifications:

1) Is there a way to put some key into an app (binary which is delivered from AppStore) and be completely secure?

Please refer to this comprehensive explanation on Stack Overflow