Parse provides a cloud-based backend service to build data-driven mobile apps quickly. Facebook, which acquired the company more than 3 years ago, announced that the service would be shutting down on January 28, 2017. An open source version enables developers to continue using Parse to build apps.

While there are many alternate options to Parse, most of them lack either the functionality, documentation, or sample code to enable quick prototyping. For this reason, the open source Parse version is a good option to use with minimal deployment/configuration needed.

You can review this Wiki to understand the current development progress of open source Parse. There are a few notable differences in the open source version from the originally hosted version:

Many of the options need to be configured by tweaking your own configuration. You may wish to fork the code that helps instantiate a Parse server and change them based on your own needs. The guide below includes instructions on how to add push notifications and storing files with Parse.

The steps described this guide walk through most of the process of setting an open source version with Parse. There are obviously many other hosting options, but the one-click deploys made available with Heroku as discussed in this guide are the simplest. In both cases, you are likely to need a credit card attached to your account to activate.

Signing up with Heroku

Use Heroku if you have little or no experience with setting up web sites. Heroku allows you to manage changes to deploy easily by specifying a GitHub repository to use. In addition, it comes with a UI data viewer from mLab.

If you ever need to change these values later, you can go to (https://dashboard.heroku.com/apps/<app name>/settings). For instance, if you intend to setup push notifications, there are additional environment variables such as GCM_SENDER_KEY and GCM_API_KEY that will need to be configured. See this section for the required steps.

Check out this guide for a more detailed set of steps for deploying Parse to Heroku.

Now, we can test our deployment to verify that the Parse deployment is working as expected!

Next, make sure you can create Parse objects. You do not need a client Key to write new data:

Be sure to replace the values for myAppId and the server URL. If you see Cannot POST error then be sure both the X-Parse-Application-Id and the URL are correct for your application. To read data back, you will need to specify your master key as well:

Be sure to replace the values for myAppId and the server URL. If these commands work as expected, then your Parse instance is now setup and ready to be used!

There are several options that allow you to view the data. First, you can use the mLab viewer to examine the store data. Second, you can setup the open source verson of the Parse Dashboard, which gives you a similar UI used in hosted Parse. Finally, you can use Robomongo.

The hosted Parse instance deployed uses mLab (previously called MongoLab) to store all of your data. mLab is a hosted version of MongoDB which is a document-store which uses JSON to store your data.

If you are using Heroku, you can verify whether the objects were created by clicking on the MongoDB instance in the Heroku panel:

You can also install Parse's open source dashboard locally. Download NodeJS v4.3 or higher. Make sure you have at least Parse server v2.1.3 or higher (later versions include a /parse/serverInfo that is needed).

If you see errors such as command not found or no such file or directory, try these tips!

Connect to your dashboard at http://0.0.0.0:4040 or http://localhost:4040. Assuming you have specified the correct application ID, master Key, and server URL, as well as installed a Parse open source version v2.1.3 or higher, you should see your Parse Dashboard appear correctly in your browser:

You can also setup Robomongo to connect to your remote mongo database hosted on Heroku to get a better data browser and dashboard for your app. 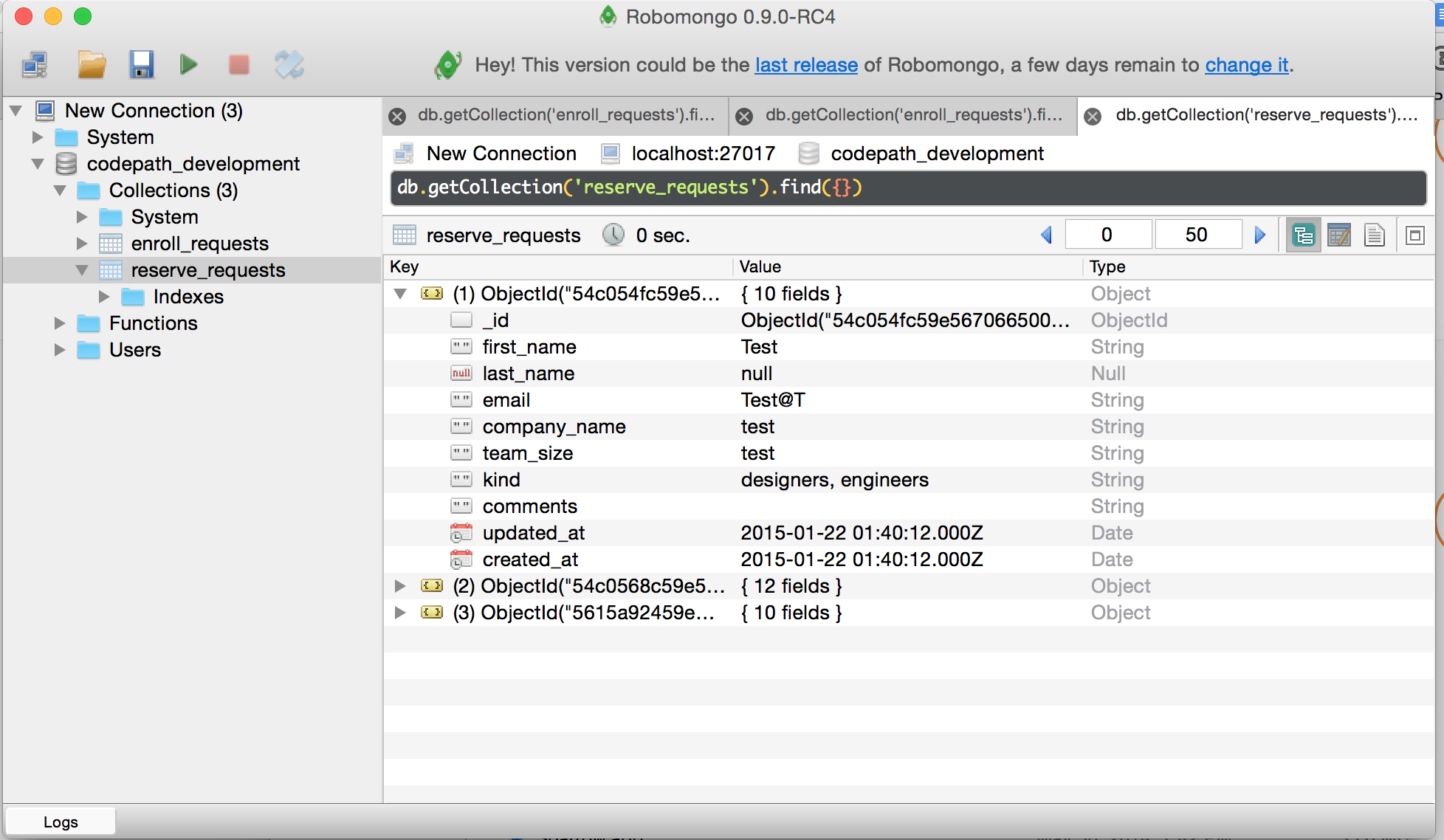 To access mLab databases using Robomongo, be sure to go the MongoDB instance in the Heroku panel as shown above. Look for the following URL: mongodb://<dbuser>:<dbpassword>@ds017212.mlab.com:11218/heroku_2flx41aa. Use that to identify the login credentials:

Note that the user and password provided are for a database user you configure and are not your mLab login credentials. Using that cross-platform app to easily access and modify the data for your Parse MongoDB data.

One of the newer features of Parse is that you can monitor for live changes made to objects in your database (i.e. creation, updates, and deletes) To get started, make sure you have defined the ParseObjects that you want in your NodeJS server. Make sure to define a list of all the objects by declaring it in the liveQuery and classNames listing:

See this guide and this spec for more details. Parse Live Queries rely on the websocket protocol, which creates a bidirectional channel between the client and server and periodically exchange ping/pong frames to validate the connection is still alive.

Websocket URLs are usually prefixed with ws:// or wss:// (secure) URLs. Heroku instances already provide websocket support, but if you are deploying to a different server (Amazon), you may need to make sure that TCP port 80 or TCP port 443 are available.

Follow the setup guide. Make sure you have the latest Parse-Android SDK

First, you must login with your Heroku login and password:

You can then view the system logs by specifying the app name:

The logs should show the response from any types of network requests made to the site. Check the status code.

And add this network interceptor as well:

Open up chrome://inspect. You can use the Chrome debugging tools to set breakpoints in the JavaScript code.

Point your Android client to this server::

See this guide for more details about how to setup both the Parse open source version and the Parse Android SDK Client.

You can continue to save large files to your Parse backend using ParseFile without any major changes:

By default, the open source version of Parse relies on the MongoDB GridStore adapter to store large files. There is an alternate option to leverage Amazon's Simple Storage Service (S3) but still should be considered experimental.

If you wish to store the files in an Amazon S3 bucket, you will need to make sure to setup your Parse server to use the S3 adapter instead of the default GridStore adapter. See this Wiki for how to configure your setup. The steps basically include:

When testing, try to write a file and use the Amazon S3 console to see if the files were created in the right place.